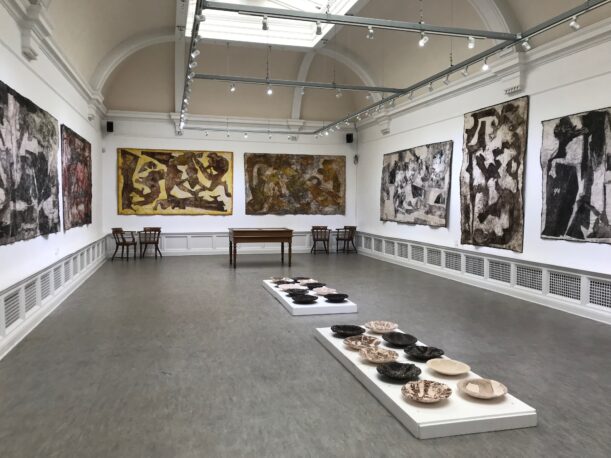 Over £13,000 has been made available to creative professionals in the region through the South of Scotland Visual Artist and Craft Maker Awards (VACMA).

The scheme provides a valuable opportunity for artists and makers at any stage of their career to develop and advance their creative practice in ways that they may not otherwise have been able to do and can open up new avenues of creativity and innovation.

Established by Creative Scotland, VACMA is a programme of small grants delivered with a range of local authorities and art agencies across Scotland. In the South of Scotland, the scheme partners are Live Borders and Dumfries & Galloway Council.

The Creative Scotland VACMA scheme has been running since 2009 in the South of Scotland with over £140,000 in support going directly to creatives in the Scottish Borders and Dumfries and Galloway. This year’s VACMA programme offers two fixed fee bursaries – the first is a £750 grant for visual artists and craft makers who can demonstrate a commitment to developing their creative practice; the second is a grant of £500 for new graduates/emerging artists.

Amanda Catto, Head of Visual Arts, Creative Scotland said: “These bursaries are invaluable in supporting the creative development of artists and craft makers across Scotland. With thanks to National Lottery players who make these awards possible, we’re pleased to be working with local partners to deliver the scheme across 25 Local Authority areas, offering grants to emerging and more established practitioners, alike.”

The South of Scotland scheme is administered by the Creative Arts Business Network (CABN) project, which is part of Arts & Creativity, Live Borders.  Applicants in Dumfries and Galloway are supported by artist led organisations Upland and D&G Unlimited, with Upland able to advise and support potential applicants on the process.  The national and regional partnerships which support the South of Scotland scheme are incredibly important and have led to collaborative working, knowledge sharing and wider activity to support creatives beyond delivering the scheme.

Just under £7,000 has already been allocated to creatives in Round 1 of this scheme, and another £6,000 is available in Round 2 – deadline for applications is 5th October 2021. 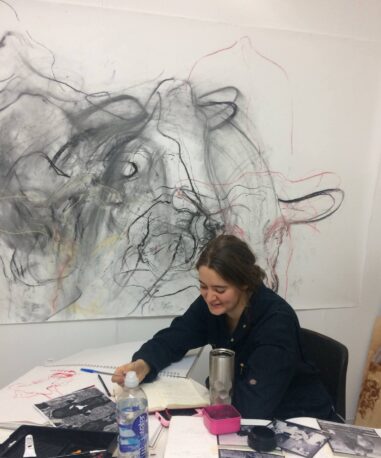 Kirsten Shanks is a visual artist and recent Glasgow School of Art graduate who lives near Kelso, and received an emerging artist bursary in the first round of this South of Scotland VACMA scheme. Kirsten’s work is about the cultural understanding of landscape, and is inspired by romanticised ideals of landscape and the landscapes of the Borders where she grew up. Kirsten said “I feel really grateful to have received the award. It’s going to be hugely beneficial to my work and I am really excited for the show I’ll be able to put on as a result of the funding Usually, I work part time to fund my studio work, but with the pandemic closing down the hospitality industry it’s been difficult both to fund new work and to be motivated to create, so this funding really couldn’t have happened at a more opportune time.” 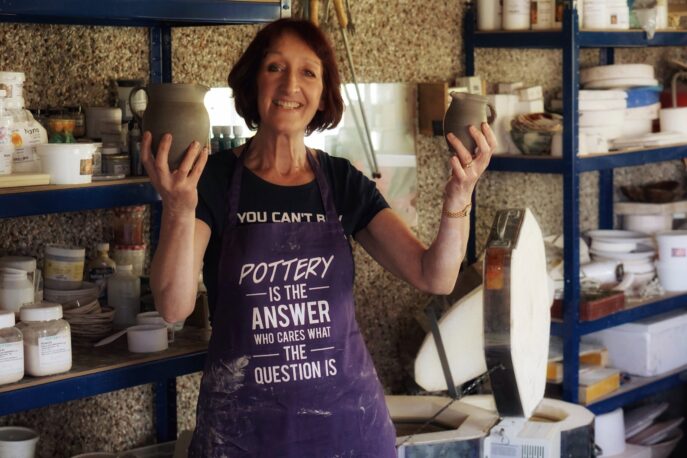 Elaine Henderson is a potter based in Hawick, who received funding to purchase equipment, experiment with new materials and develop work inspired by music and her love of modernist poetry. “Receiving the VACMA award is both validation for ongoing work and great encouragement for the future. It will specifically enable me to dig more deeply into the experiences of the past year in order to try to make sense of what we have all experienced, and hopefully produce a body of work with a renewed sense of hope.”

Support from VACMA is invaluable to artists and makers both for morale and to temporarily relieve financial constraints. I am very aware of the responsibility of using public money and look forward to using my craft to the benefit of others as well as myself.’

Over the years that the South of Scotland VACMA scheme has been running, it is clear that even small amounts of funding have had a huge impact on the development of artists and makers, and have raised confidence and ambition.

Artist Anna King, a previous VACMA recipient who received funding from the scheme in 2016 enabling her to take up the offer of a residency in Iceland. Reflecting on the difference the funding made to her she said ‘It has provided me with a period of reflection and experimentation, and lots of source material from which to create a body of new and interesting work. It allowed me to take a place on a prestigious international residency program and meet and exhibit with artists from all over the world.’ 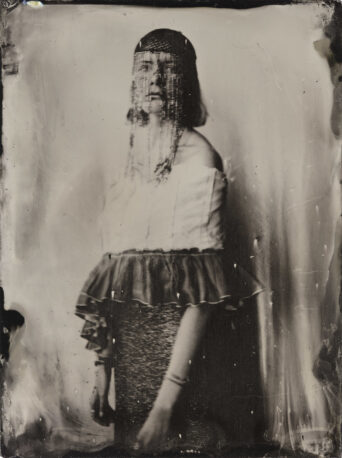 Kyna Hodges is a visual artist and graduate of Glasgow School of Art who lives near Moniaive, and received an emerging artist bursary in the first round of this South of Scotland VACMA scheme. Kyna’s work investigates versions of reality, and usually consists of 3 elements: photography, sculpture and collaboration. Kyna received funding to research forms of photography which have a reduced environmental impact and will also be able to invest in fabrics and materials for masked and costumed figures, which are often the subjects of her work. Kyna said “I’m delighted to have been awarded this bursary. I’m excited by the opportunity to experiment with new ways of image making that are environmentally sensitive and sustainable, enabling me to further my inquiry into alternative photography and costume and extending my visual language. I am hoping to create work that will inspire new collaborations into the future.”

Jeweller Robyn Kinsman-Blake said after receiving mentoring and training support ‘The skills that I have learnt …have given me a much greater confidence in my work and freedom when designing.’ 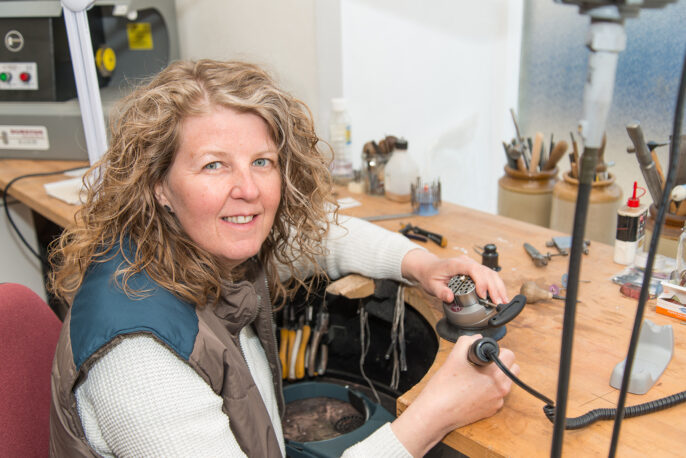 Lisa Rothwell Young is a jeweller based in Langholm, who received funding in the first round of this South of Scotland VACMA scheme to learn micro pave. Lisa will now be able to access one to one tuition to develop her technical skills in what is a very specialised and precise way of setting stones that uses a microscope and air gravers.
Lisa says ‘It’s fantastic to have this support through VACMA and appreciation for the work that I do, especially given the current circumstances. The funding has enabled me to make a start on some lengthy and challenging technical training, which will build on my existing interest and skill in the area of stone setting. I look forward to being able to show off some new designs and techniques in the coming year.’

Duncan Herd, who received funding to exhibit in Japan shortly after graduating, provided feedback on how important the award was to his professional development and the support and advice given by CABN: ‘The award scheme has truly been pivotal to my progression as an emerging artist … I’m extremely grateful for the support of CABN in facilitating the award …Your information, encouragement and generous advice early last year was invaluable to me, in helping bridge the gap between art school and a more independent practice with the support of the award.’ 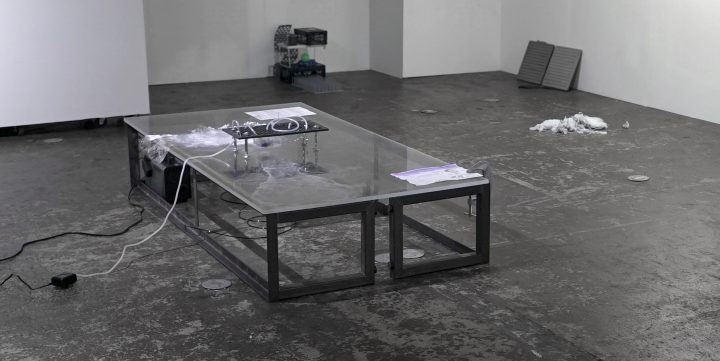 For further information and to apply please go here